On September 26, 2017, the MSM reported that the U.S. President Donald J. Trump and his Spanish counterpart Mariano Rajoy, met in Washington, and then both had a joint press conference. Rajoy said he will be delaying the budget in Parliament because of needed support to approve it, and doesn't think about calling early elections. The regional government in Catalonia is holding a binding referendum Sunday on separating from Spain. The Spanish government insists such a vote is illegal and promises it won’t take place. Trump stated that the Catalonia people love their country and would not want to leave; he has great respect for the country, and it would be foolish for Catalonia to leave Spain. Trump discussed relief efforts in Puerto Rico after hurricanes devastate US territory. Trump was then asked for his reaction to North Korean threats to shoot down U.S. planes, and he answered that U.S. could use a second option, if a diplomacy doesn't work, and this will be "devastating" for North Korea, if U.S. takes it.  The President mentioned that he's not 'preoccupied' by NFL protests, but 'ashamed' by them! Rajoy, on the other hand, said he and Trump agreed the North Korean regime is in "intolerable" violation to the international legality and his Government will step up on sanctions against North Korea.  Rajoy said Spain wants a bilateral relationship with the United States: "The relationship between the two countries has been excellent." Trump repeated the word "reciprocal" twice, referring to fair trade deals, beneficial to all parties, including the United States. Let's look at some Gematria: The PM Rajoy visits the White House 40 days (5 weeks + 5 days) after the Barcelona terrorist attacks. #40th Prime Nu.# is #173. Note, "Manipulation" = 173 in EK#1. Nu. #40 x 2 is #80, confirming the Numerology of #80 for September 26, 2017. "Black Magic controls you" = 80 in LRG. 5 wks. and 5 d. make the number #55.  #40 and #55 were present in prior terror acts and events we covered: #55 means "strong, excellency"; "Star of David"=55  in LRG, "Freemasons" = 55 in LRG; "Abaddon"=55 in EK#1; "Abaddon"('Satan') is seen in Revelation 9:11  of the Bible. #55 was part of the Berlin terror hoax. Also, "CoveOps" = 40 in LRG. The word "Life" in Latin Gematria Equals exactly 40. "Life" also in English Gematria is #192. Hence, September 26 is a day with Numerology of (exactly) #192! See how is all scripted? Further, "a False flag" = 40 in LRG and also "a False flag" = 80 in EK#3! A perfect match with the above! The meeting between the 2 heads took place 960 hours after Barcelona Terrorist Attack. #960 could make the #96 (In Hebrew,  in general, zeros are omitted!), which matches the following Numerology: Sep. 26 is the 269th d. of the year in the Gregorian calendar. There are exactly #96 days left until the end of the year! Meeting perfectly scheduled "by the numbers". Note, "False flag terror event" = 96 in LRG, suggesting Barcelona terrorist attack was a "false flag terror event". I want to focus on the fact that President Trump held the joint PCon. with the Spanish President Rajoy exactly on September 26 at 1:45 p.m., see his calendar.  Everyone is familiar with the Illuminati Cards. In fact, Illuminati Card  #133 (#133 being as our favorite # to discuss, means a "Black Magic Ring"!) is called "Charismatic Leader" (in fact, showing potentially Donald Trump before even the elections took place, basically telling you that the "Black Magic Ring" controls everything!): 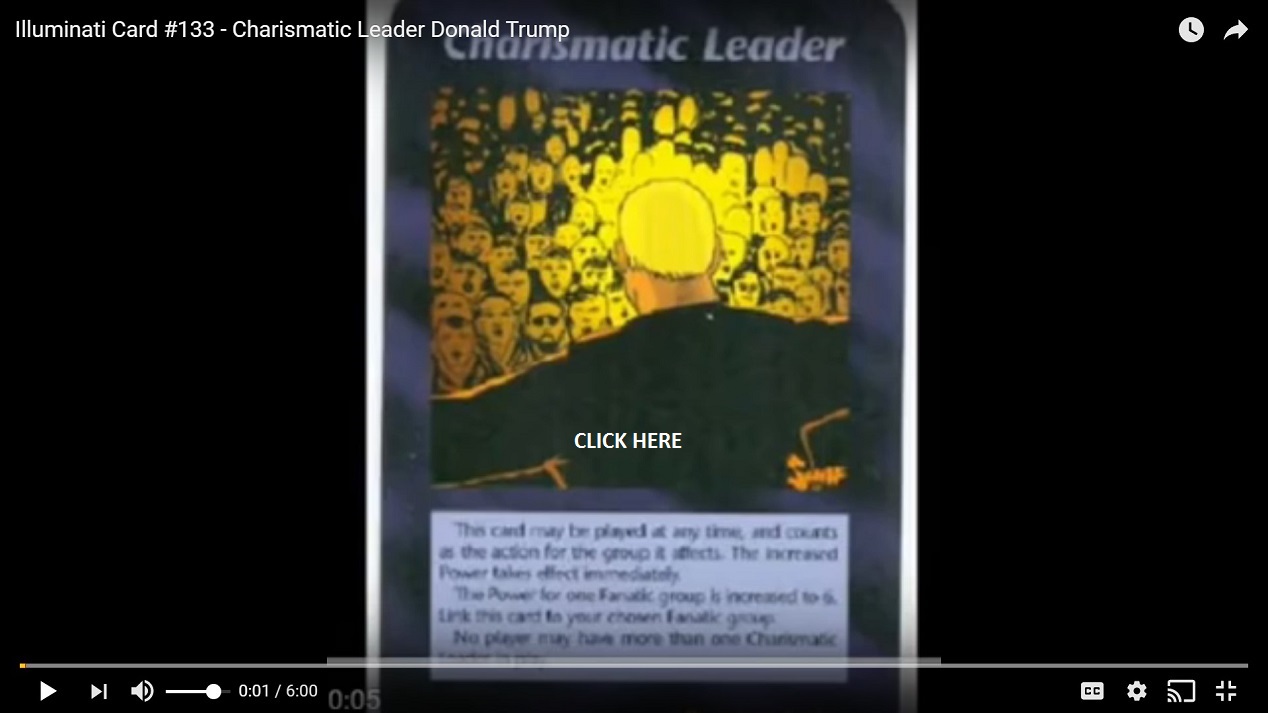 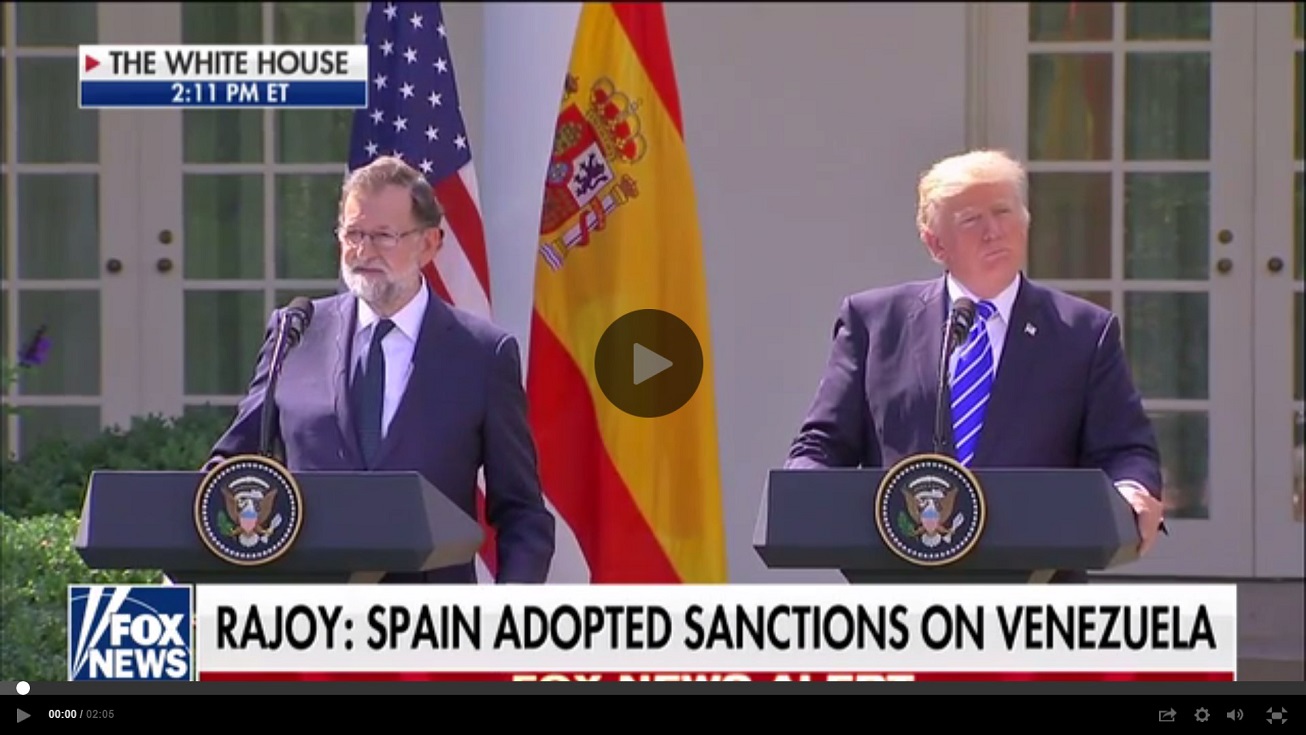 In summary, this meeting proved once again that we are all in a coded Matrix and politicians are only puppets, and Trump is really having a hard time changing things. MSM continues to manipulate the public by posting scripted materials. I am not the only one, who thinks we are in a Life coded Matrix! Elon Musk agrees with me 100%: Watch Elon Musk, telling you we are actually living in coded* system.  *This is what a "simulation" actually means:

If you still don't believe in the Matrix, think twice! To all, who have absolutely NO idea about the world they LIVE in, let me explain something about the "cracking of the code": This is not an easy thing to do, for a simple reason - picture the Matrix and the entire Universe: If every single thing in life, in fact, is coded (this is what a Matrix is!), based on the circumstances, certain scenario does or does not take a place, respectively, certain coded scenario does or does not happen. Therefore, prediction for the outcome of certain events is still very, very difficult, but yet, using the codes, could put you in a much better position to discover the correct path of an event in life, than all of those, who are totally blind and lost in this CODED world, and doing nothing...

As we are improving our knowledge daily, I am hopeful, one day we can have more answers about the Matrix. This is much better approach than sitting down and doing nothing, and remain delusional or being an emotional egocentric-individual, thinking that he / she knows everything in life already...A sure recipe for disaster! I call such people, pathetic losers in life.

Matrix888.org will introduce soon 12 more New Calculators for Gematria, that have not been used by anyone, and we hope to improve the "so-called" 'cracking of the code'. All funds raised so far have been given to a programmer to improve and test calculators and maintain our site. I don't need any money myself, since I was long-enough in the investment banking business. Hence, we need to support the site and we need your help to do it! I would rather do something any day of the week instead of being passive; If you do not believe in the Matrix, you will remain delusional for a long time...

Cheers and GOD BLESS You ALL!

Milo Georgieff commented on Sunday 3rd of December 2017 03:52 PM
THE MOST IMPORTANT MATCH - Dec 03 Numerology - the same with Aug. 17 Numerology:

Do you see, how clearly they do it "by the numbers"?! Does anyone need more proof that we're in a LIFE MATRIX?
In reply to: #Milo Georgieff

#312 is very interesting and important, in particular, to me:
"The Society of Brothers in Unity" 312 in English Kabbalah #3, the secret society (Yale University);

Milo Georgieff commented on Thursday 19th of October 2017 01:52 AM
Today, October 18, a day with Numerology of 3110, or #311 -"The Beast" (pointing to the "Black Magic Ring", which controls this world), The French Senate has approved the new anti-terrorist bill, proposed on October 3rd, criticized by human rights activists as restrictive of civil liberties. Frances interior minister Gerard Collomb said that nobody is safe in the country as it is still in a state of war. The parliament's lower house, the National Assembly, passed the new legislation in the first reading on October 3, and today was the final approval by the Senate! This was only announced via 1 min. minute news flash presentation by the Sky News Zurich, as the world MSM absolutely did not report on the matter - check out the MSM news today, the only thing you will find, will be the Oct 03rd press, the 1st passage of the Law by the Lower house.

The New Anti-Terrorism Legislation Echoes The PATRIOT Act, Expands Spying Powers And Government Reach. It extends the powers of the Interior Ministry, which will be able to set up security zones without the approval of a judge. See this: Electronic surveillance tags might be imposed on those regarded as a threat to national security(!), while officials will also have more power to close down places of worship deemed by intelligence agencies as inciting violence or justifying terrorism. Inside the zones, the movement of people and vehicles can be restricted and searches can be conducted. Police will also be given wider powers to raid private property with formal judicial approval, check emails, computers, seized whatever they think is appropriate - I call that a Fascism /ˈfæʃɪzəm/ "in action." The new bill is regarded by many as a conversion into common law of emergency measures, which have been in place in France since late 2015. The state of emergency introduced following the Paris attacks in November that year, is set to be lifted on Nov. 9. The new law will be in effect from November 1.

Folks, this bill comes as a result from the Las Vegas shooting hoax, do you see now how they use these hoaxes to limit our Freedoms?

It claims #515+ injured, it connects to #155 out number # in play - Barcelona!!! What a Hoax! They are killing innocent people to maintain a "Fascist NEW World Order"!
In reply to: #Milo Georgieff

Milo Georgieff commented on Monday 2nd of October 2017 07:44 PM
Code #911 is also present in the Numerology codes for October 1 as well:

Milo Georgieff commented on Monday 2nd of October 2017 07:27 PM
Yes, Barry, and the shooter was staged on the 32nd Floor: 32 is "Black Magic, you know we discussed this # all the time!
In reply to: #Barry T.
Commented by: #Milo Georgieff

See the name of the shooter: Stephen Craig Paddock, 64!?! Give me a break! #64 connects to #311 and the above!!! This tied to Barcelona Terror Attacks by the Numbers - #155 is our Number connected to Barcelona (read the article above!) - see this - "One hundred fifty five" is 270 in English Kabbalah #3, but "Stephen Craig Paddock" is 540 in Latin Gematria so #270x2 is #540 - deeply tied!!! "One five five" is 68 in Latin Reduction Gematria, but "Paddock" is also 68 in English Kabbalah #1, all tied in the Life Matrix! "Las Vegas Nevada USA" is carrying by a chance the code of #75 in Latin Reduction Gematria; Well, #75 equals "New World Order"In English S Gematria, and also "Order Out of Chaos" is 75 in Latin Reduction Gematria! So, Las Vegas is chosen "by the numbers" just to show you, who is in charge here!
Commented by: #Barry T.

Ranger 77 commented on Wednesday 27th of September 2017 04:48 PM
Milo, good job! Congratulations! We're all so proud of you! Keep going!
In reply to: #Milo Georgieff
Commented by: #Milo Georgieff

Barry T. commented on Wednesday 27th of September 2017 04:45 PM
Milo, great work, as usual! Sending you more MLB picks tonight by email! Hope to have the platform ready, so we can stop those emails:)
Be good and keep up the excellent work! Those codes are amazing!
Commented by: #Milo Georgieff