According to the media, the truck killed 12 people and injured 50 more in a suspected terrorist attack 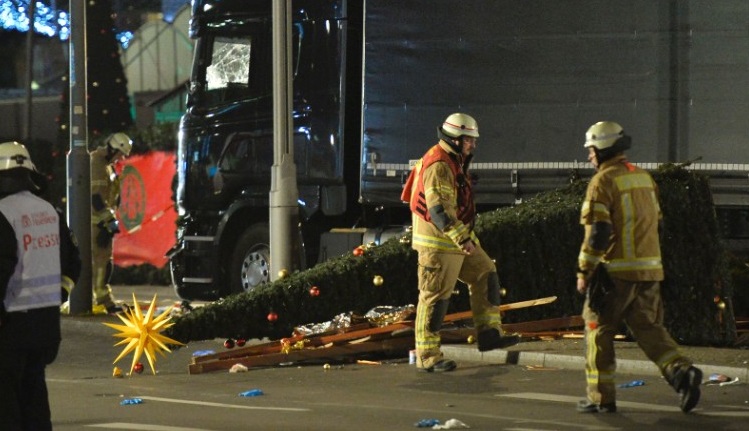 In view of the above, it seems this truck-attack incident is a “terror hoax”. It creates an environment for any Government to call for a constant "State of Emergency", which would give the Government officials the authority to do whatever they like without asking the Parliament to approve their steps, including, but not limited to, taking away our guns, a great way for the rulers to strip us off our freedoms and impose indirect "Martial law". I will repeat again, the mainstream media continues to manipulate the minds of the general public by providing such scripted news, "by the numbers".  As more facts come in, we'll continue to bring you updates on the story.

UPDATE December 23, 2016:  The mainstream media just reported that Berlin market attack suspect Amri was killed in Milan.  The headlines phrase "Berlin market attack suspect killed in Milan"= 540 in English Kabbalah #1 (EK#1).  Note, "Berlin terrorist hoax December nineteen two sixteen"= 540 in EK#3. Moreover, the report states: "Anis Amri confirmed killed".  Note, "Anis Amri confirmed killed"= 114 in LRG. So, 114 is "in play" again (see above), but we post the analysis again: Phrases "Black Magic Berlin terror hoax"=114 in LRG, "Black Magic"=114 in EK#1.  German interior ministry said 'there are 330 'relevant people' in the country, those suspected of, at the very least, having terrorist sympathies'. Note, "relevant people" =224 in EK#1, but also "Berlin terrorist hoax December nineteen two sixteen" =224 in LRG. In Hebrew, zero is generally omitted, so 330 'is viewed' as 33 (above). The terror hoax is confirmed and concluded. Lastly, just "in", another headline: "Berlin market attack suspect killed in Milan after shootout with police"=3366 in LG. 3366 divided by 33 = 102, nice script: 102 connects to 911 (above); the World Trade Center’s NT falls 102 minutes after being struck by Flight 11. This story now is fully completed.

« Russian ambassador to UN dies in NY: HIT and RUN?! NASA Hoax? Scientist tells Earth due for a hit by comet »

otaku miyazaki commented on Sunday 25th of December 2016 03:16 PM
Don t forget the assasination of the russian ambassador in ankara on the same day is also a fake Putin works with Merkel Trump and Co They are all freamasons There was another Incident on the same day in Zürich Trump knew about it before anyone in town did I live in Zürich and there was nothing on the news not even in the Net I heard about it in German Television during the night and after a view minutes came Trumps Reaction about this three incidents These three Events are linked because Trump says they are He sure knows everything and more

Amaya commented on Thursday 22nd of December 2016 05:50 PM
Thanks for the awesome article, Love you work, just went through the entire site. Please, continue to write

Sarah j m commented on Thursday 22nd of December 2016 05:38 PM
Excellent work! It couldn't have been better analyzed. Keep it up, Milo:)

Long John commented on Thursday 22nd of December 2016 04:39 PM
Milo, how do you source your English Kabbalah? It sounds like you've got plenty of terms in the Kabbalah dictionary? Thank you.

otaku miyazaki commented on Thursday 22nd of December 2016 01:25 PM
You did a fine job Respect The Berlin Truck Attack is clearly a hoax and the Occult Elite is goin nuts with their mystic kabbalah bullshit