WikiLeaks founder J. ASSANGE EVICTED from the Ecuadorian Embassy and arrested, all 'by the numbers'!

PLEASE, DONATE TODAY. Blessings! The Creator with You!:


WikiLeaks founder Julian Assange has been evicted from the Ecuadorian Embassy in London where he has spent the last 6 years and then brutally arrested, as Ecuador has withdrawn asylum from Assange, the MSM reported. Assange has been arrested for 'extradition to the United States for publishing'. Our initial reaction to this incident, all "by the numbers":

Assange was arrested after 6 years of living in the Ecuadorian Embassy, 6 - Waw is "man in his sinful nature," which denotes Satan's influence over man! Assange exposed great, great crimes and now "a judgement" has been rendered against him "by the numbers" showing without a doubt that 'the system' will not tolerate people like him - there is NO good faith shown to any whistleblower!

Julian Assange was born on July 03, 1971: From and including: Saturday, 3 July 1971, to, but not including Thursday, 11 April 2019, there is a time span of 17,449 days excluding the end date or 573 months, 8 days! 17 in Hebrew means "God, to cry ah!, a sacrifice, to make a circle, mark out with a compass, a foundation" and 449 stands for "cover, to cover up" (87th prime-"God's Day"!). 573 is an interesting number, in the Hebrew Table stands for  "a cake (sacrifice!), and Nebuchadnezzar, King of Babylon,"  8 is the number of Jesus! [Nebuchadnezzar, r. c. 1125–1104 BC, was the 4th king of the Second Dynasty of Isin and Fourth Dynasty of Babylon. He ruled for 22 years according to Babylonian  King List C, and was the most prominent monarch of this dynasty. Nebuchadnezzar II is an important character in the Old Testament Book of Daniel. Daniel 1 introduces Nebuchadnezzar as the King who takes Daniel and other Hebrew youths into captivity in Babylon, to be trained in "the learning and the tongue of the Chaldeans". In Nebuchadnezzar's (II) second year, Daniel interprets the King's dream of a huge image as God's prediction of the rise and fall of world powers, starting with Nebuchadnezzar's kingdom (Daniel 2). Nebuchadnezzar’s strategic planning appeared in his attack on the Arab tribes of NW Arabia, in preparation for the occupation of Judah. He attacked Judah a year later and captured Jerusalem on March 16, 597, deporting King Jehoiachin to Babylon.]

According to Assange's lawyer, all Assange did was to publish the information provided to him by US Army soldier Chelsea Manning, as the same information was also published by the Guardian and the New York Times! Hence, the U.S. Government has decided to prosecute only Assange, and here we are: The US indictment against Julian Assange alleges that the whistle-blower engaged in “conspiracy” with Chelsea Manning in 2010, according to a statement from the US Dept. of Justice. The statement said Assange is charged with conspiracy to commit computer intrusion and alleged attempts to break the password for a classified U.S. government computer, leaked to the site by Chelsea Manning. Manning was tried by a U.S. tribunal and sentenced to 35 years in jail for disclosing the materials. Manning was pardoned by outgoing President Barack Obama in 2017 after spending 7 years in U.S. custody. She is currently being held again in a U.S. jail for refusing to testify before a secret grand jury in a case apparently related to WikiLeaks. In other words, unless Manning sustains the current U.S. indictment against Julian Assange, she will remain in jail. The arrest of Assenge is a direct attack on the free speech, the 1st Amendment, and the fair publishing...BEWARE! 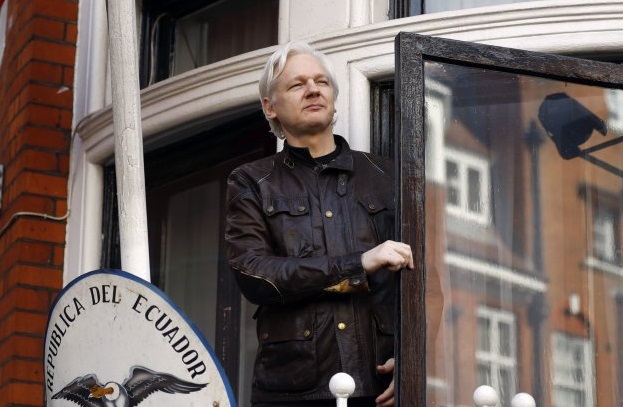 This is a developing story, it will be updated as more information becomes available

Anonymous commented on Friday 24th of May 2019 12:21 AM
"When exposing a crime is treated as committing a crime, you are ruled by criminals."
In reply to: #Milo Georgieff

Result: 274 days
It is 274 days from the start date to the end date, but not including the end date.

Or 9 months excluding the end date,

9 is the Number of the TRUTH, Teth NEW LIFE; Completeness! Used 49 times in Scripture, the number 9 symbolizes divine completeness or conveys the meaning of finality: Christ died at the 9th hour of the day, or 3 p.m., to make the way of salvation open to everyone. Now, 274 in the Hebrew Table is " to arrange, to set in order, to tremble or fear, "Wild a**", i.e. all by the numbers!
In reply to: #Milo Georgieff
Commented by: #Anonymous

This has happened on April 15, the same day the Notre-Dame fire in the Cathedral in Paris has taken place:
https://www.clickorlando.com/news/unlucky-day-notre-dame-fire-isnt-first-major-april-15-tragedy

How's that happened?! Unless someone fixed it purposely, I don't see other reasons...Which is very troubling, to be honest!!!

Cheers and God Bless!
In reply to: #Barry T.
Commented by: #Milo Georgieff