2 False Flag Incidents in Spain today, a Tribute to the Barcelona attacks of 2017: "By the Numbers"

The incidents occurred just 3 days after the 1st anniversary of the double terrorist attacks in Barcelona and nearby Cambrils. On August 17, 2017, a rented van ploughed through crowds on the boulevard Las Ramblas in Barcelona, killing more than 12 people and injuring more than 100. Note this:

1. Attack on police station in Catalonia [investigated as a terrorist act]

"A knife-wielding man reportedly shouting “Allahu Akbar” has been shot dead after he attempted to attack a police station in Barcelona. Catalonian police said the attacker tried to enter the Cornella police station “with the aim to attack” the officers shortly before 6am local time (4am GMT) on Monday. The knife-wielding man was shot down at the scene." - reports say...

First of all, let me remind, all subscribers, who are getting the daily Numerology, received today the "numbers for the day" - today is 20th, and one of the meanings for '20' is "battle-shout"! The attacker was a 29-year-old man. Today is a day with 29-Numerology. Well, it fits the description of what this guy did, isn't it(?), attacking and shouting, i.e. all "by the numbers":

"Two people are in police custody after a car ploughed into three pedestrians in Casetas, northwestern Spain. The incident on Logrono Avenue in Spain’s Zaragoza province occured around 9:20 am local time Monday when a vehicle mounted a pavement and hit people at a zebra crossing. Three pedestrians, a 45-year-old man and a couple in their 60s, were injured in the incident, according to local emergency  services, which sent out a Twitter alert about the morning collision." - reports say.

More Gematria alignments confirming without a doubt that those 2 incidents were CovOps: A Covert Operation is an operation that's intended to conceal the identity of the sponsor. It is intended to create a political effect which can have implications in life, affecting either the internal population of a country or individuals outside it. Covert operations aim to secretly fulfill their mission objectives without anyone knowing, who truly sponsored or carried out the operation, in many cases false identities are used to carry out such operations. 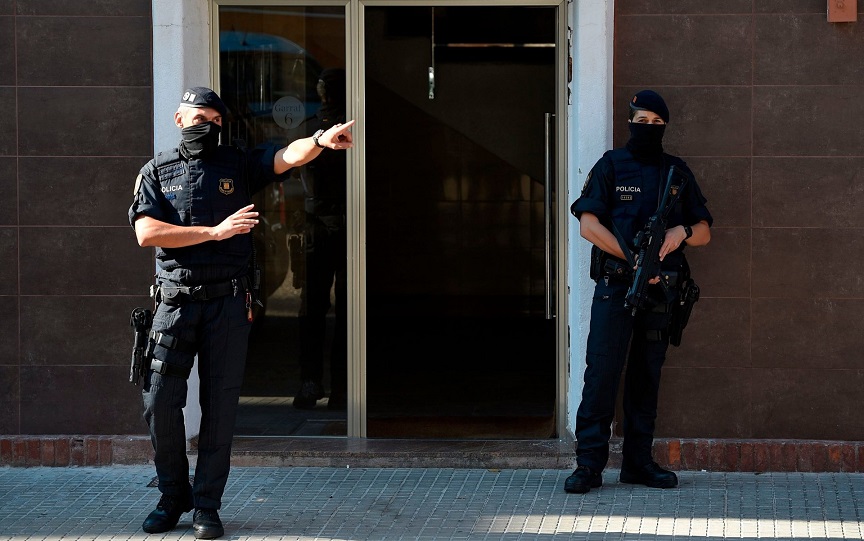 24 - Elders of Israel; Strategy; Trust, Security; "David"; /negative meanings: Wild Beasts, crushed, victim./
The number 24 refers to Israel - derived from the 24 Elders of Israel (Rev 4:4, 10; 5:8; 11:16; 19:4; The Elders were in positions of leadership and responsible for strategic alignment; According to the Hebrew Scriptures, Satan's strategy has always been to destroy Israel :) lol! Thus, according to the Hebrew Table, 24 refers to a strategic Satanic Counterattack on Israel :) lol! The Giants, who opposed the army of Israel had 24 fingers and toes (2 Sa. 21:20; 1 Chron. 20:6); Strategic advance in Israel is designated by 24: There were 24 bulls for peace offerings in dedication of the Tabernacle and 2400 shekels total silver utensils (Nu. 7:85); On the 24th of the 7th month during Feast of Tabernacles, regathered Israel celebrated a Holy Day convocation; Prophesy on 24th of 9th month (Hag. 2:10, 18, 20); David's Organizational Structure was based on the #24 (1 Chron. 24, 25, 27). 24 also is closely tied to Letter Tet -its Hebrew Gematria is 9-Number of the Truth, it means Good and Evil!

"August Twenty Fourth, Two Eighteen" is 136 in Pythagorean Gematria, 136 always there, as well!
In reply to: #Milo Georgieff

235 "in play" today, which is matching 'Hit and Run' of the Illuminati Card collection!
https://matrix888.org/usr/files/images/HitRun.jpg

Another kill today in Paris, because we have again the codes of the Barcelona Terror Attack:
https://on.rt.com/9cws

23 - Cursing turned to blessing; Spiritual uptrend in history; "Brotherhood"; "Gift of Yah"; Some Other meanings /negative/: a sin, a sin offering, to hurt, to pierce, feel pain, to suffer, pain, grief, wild beasts; In line with the negative, we've got another knife attack this time in Paris suburb today, see link: https://on.rt.com/9cws !

Milo Georgieff commented on Tuesday 21st of August 2018 10:03 AM
Barry, Thank you so much! You do the same:)
In reply to: #Barry T.
Commented by: #Milo Georgieff

Barry T. commented on Tuesday 21st of August 2018 09:22 AM
Milo, great job, as usual, I am back today and ready to post in the 'Sports picks' section! Keep up the good work!
In reply to: #Milo Georgieff
Commented by: #Milo Georgieff

20 - External Gates; Brotherhood; Loving; Going out and coming in; Military; A generation; "battle-shout"
Ex. 38:18 - width of Gate of the Tabernacle; Draft age (Num. 1:3); 20 Kaph, meaning "holding or reaching hand," expressing purpose or redemption. Kaph is connected with the physical side of our bodies, indicating our earthly existence. The corresponding Zodiac sign is Mercury(Kochab) where redemption is possible. Redemption can lead us beyond our earthly existence. Twenty (20) could mean a complete or perfect waiting period. For 20 years Jacob waited to get possession of his wives and property, and to be freed from the control of Laban his father-in-law (Genesis 31:38 - 41).

Gematria + Numerology of notable people: Ron Paul. He just turned 83, a good match with his Gematria of 83. An author, physician, retired politician, who served as the U.S. Represent. for Texas. He sought the Presidency of the United States: 1st, as the Libertarian Party nominee in 1988, and as a candidate in the Republican primaries of 2008 and 2012. Paul is a critic of the Federal Government's fiscal policies, especially the existence of the Federal Reserve and the tax policy, as well as the military-industrial complex(MIC), and the War on Drugs. He is known as 'Ron Paul', and with this short name, he gets codes 32, 119, 150, 58, 28.