MR. TRUMP WINS THE WHITE HOUSE AND BECOMES THE 45TH PRESIDENT OF THE UNITED STATES

Donald Trump scored a stunning victory in the Presidential Elections - it was a huge surprise for the mainstream media-"pundits", other sorts of "experts" and political "gurus"-Sabato Crystal Ball and other "analysts"-Ch. Krauthammer, B. Goldberg, Google blogs, etc..  Trump captured the White House on Wednesday, by defeating Clinton in key battleground states.  We, at Matrix888.org, were the only reliable source, using Gematria, to predict and project correctly this event in advance, even long before Prof. Lichtman did.  The odds for DJT to win the Presidency at that time were 7:1.  Mr. Trump took key swing states of Florida, North Carolina and Ohio early this morning, as he marched towards the White House.  Mr. Trump pledged that he would be "President for all Americans" in his New York victory speech. Note, phrase "President for all Americans"= 118 in Latin Reduction Gematria. 118 appears to be 11/8 - the exact date of the Elections.  The GOP Nominee won 276 electoral votes vs. Clinton's only 218 at the time he was declared the winner.  Right before that moment we had a huge delay, as the vote count was stuck at 254 for Trump, 218 for Clinton: 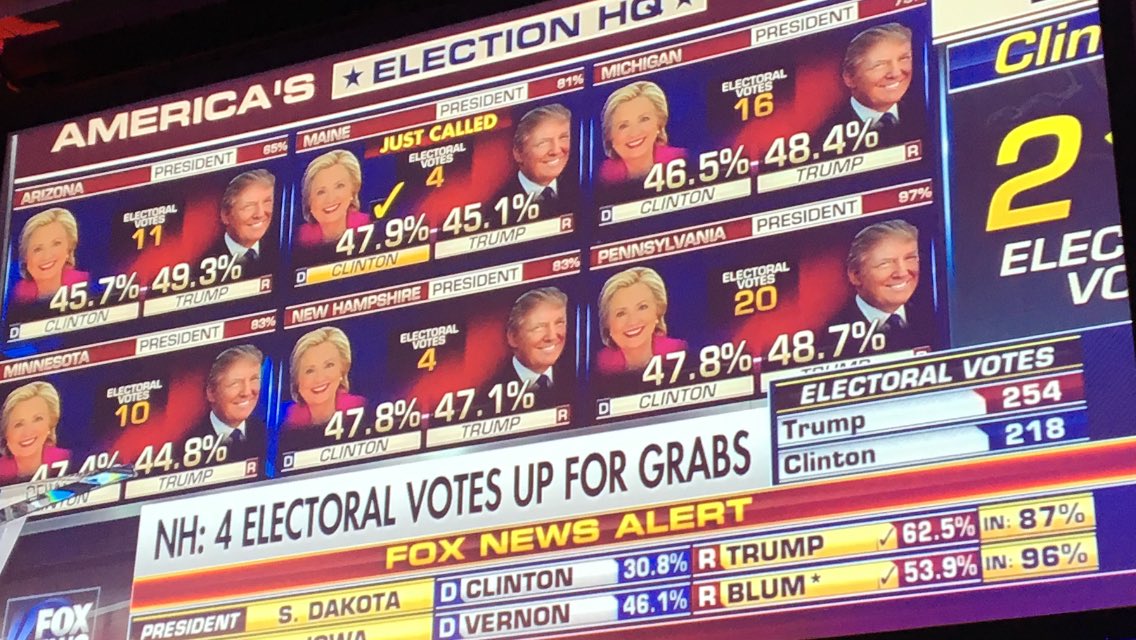 254 stands for "Splendour" (magnificent and splendid appearance), while 218 is "crushed, squeezed, pressed out, "trembling", heat, "to delay [long time was taken by the media before attesting that Trump reached the necessary votes to win], pain [for the loss]. After manipulating the general public for months with doubtful and biased polls towards Clinton, the mainstream media-"pundits" shamelessly declared today that "there was no way to predict correctly those polls" - we wonder why were they in this business in the first place? Mr. Trump was very humble, showing lots of class, in his acceptance speech, without mentioning anything about the brutal treatment he received from the mainstream media and the political establishment of both parties. Interesting enough, Mr. Trump cast his ballot at 11:08 a.m., which makes the number mentioned above - 118  [matching the date of the Elections 11/8]. 118 stands for "Gracious", "Hercules", "Rich" or "Strong", to demolish, might,   strength, wealth." [It is funny to find out what the so-called "celebrities", who supported the losing side so viciously, would do now, i.e., the disgraceful Lebron James, created and kept by the system (which, handed over the title to him!), the extreme liberal Lady Gaga, and all others.  Mark Cuban already conceded his "wrongdoings", as he sent a nice tweet to "be patient with Mr. Trump". I guess after the brutal failure of his candidate for President, he is in the rush to go back to the same person he abandoned just 6 mo. ago - a hypocrite!].

We want to congratulate Mr. Trump for the Great Win, and we wish him to "Make America Great Again!".

We also congratulate ALL Supporters for FREEDOM with the song "Kyrie" (“Lord, have mercy upon us”):

Lastly, all "media pundits"-"political experts", made us laugh a lot, following the election results - watch:

« Trump and Abe met for 'very candid discussion' in NY WHY SHOULD EVERYONE VOTE FOR DONALD TRUMP? »