Blast in a 2-story building in Russia - house fell down 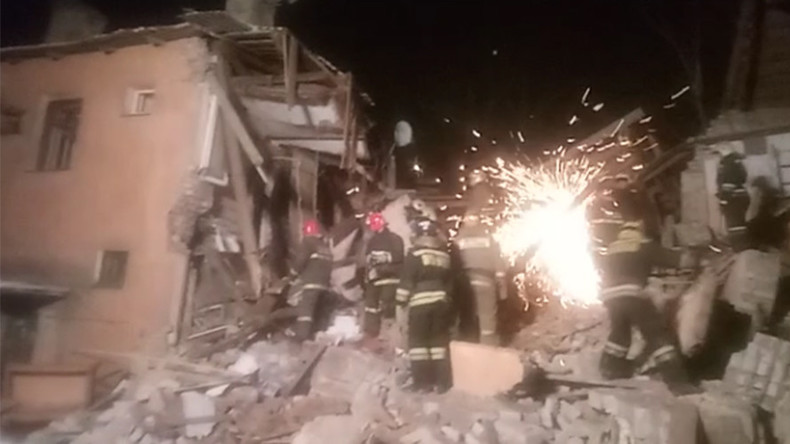 The mainstream media (RT and others, posting the same printed article) reported 5 people have died and 8 have been pulled alive from under the rubble of a two-story building because of a household gas blast that demolished 2 flats and trapped sleeping residents in Ivanovo, Central Russia.  The initial report stated - 5 missing, 1 killed, 7 saved (total of 13). One of the reported victims was a 4-year-old child. The media claimed the building housed 21 people. Emergency workers observed several “minutes of silence”. 15 people have been evacuated, 4 of them hospitalized. The authorities observed that a strong smell of household gas was detected at the site after the explosion. Let's look at Gematria:  The word "Ivanovo" has Gematria codes 38, 72, 93, 104. The codes translate to "Will of God, to burn, vanish, a gloomy spot, darkness, occupying estate". [city- name "by the numbers"]. Let's look at codes 72 and 93 -the phrase "Manipulate the public" = 72  in Latin Reduction Gematria; Then, "Brainwash Population" = 186 in English Kabbalah. 186 has a multiple of 93 (2 x 93) i.e., both deeply tied.  Let's see more - the phrase "Gas Blast" = 81 in English Kabbalah.  However, "Two-story building" = 81, in Latin Reduction Gematria, and "Minutes of silence" = 81 as well, in Latin  Reduction  Gematria. [all 3 phrases in the article tied deeply].  81 translates to "two persons [or something with that number count - 2 flats], trembling, sink, press into, ruin, projection, molding" (associated with building and construction). Nevertheless, "Gas Blast" = 32 in Latin Red. Gematria. Note, "Black Magic" = 32 in Latin Red. Gematria. Let's  even look at a longer sentence - "Gas blast destroys two flats" = 111 in Latin Reduction Gematria. 111 stand for "dark, darkness, trouble(s), to press, fall or sink [perfect alignment with the building collapse]. The article mentioned 13 people (once, 5 died and 8 pulled alive, and then 5 missing, 1 killed, and 7 saved). 13 is a number, associated with fatalities for the Average Joe (contrary to the fact, it has other meanings). Furthermore, the article states "the building housed 21". Note, the meaning of 21 in the Bible is an outgrowth of 13. Then, we have 15 (people evacuated) - the 15th Prime number is 47, which stands for "to press (for information), foolish, a fool" [for the public that reads it]. Note, the word "brainwash" = 94 in English Kabbalah. 94 has 47 as a multiple (2 x 47 = 94), i.e. 47 and 94 deeply tied. Note, "Four year-old child" = 940 in Latin Gematria (zero is generally omitted in Hebrew, so 940 could be accepted as 94). Lastly, the RT news article was published at 3:45, which makes the number 345 - meaning exactly "accident, event,  earthquake, "Rescuer" (after a disaster), panic".

In summary of the above, the mainstream media continues to manipulate the minds of the general public, by providing such scripted, "by the numbers", articles, proving again to us that we are living in a "Coded Matrix", where everything has a purpose, time, and place.