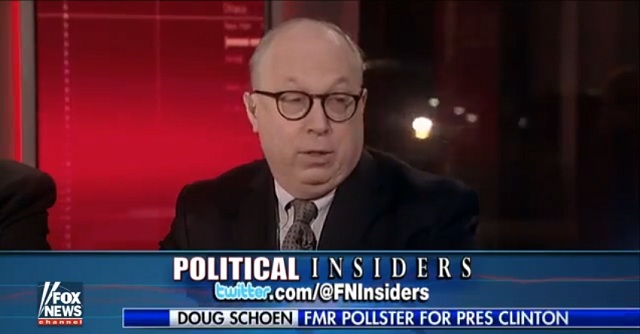 Long-term Democrat pollster Douglas Schoen, who advised President Bill Clinton in 1996 during the re-election campaign, and also worked for Hillary Clinton and her failed 2008 Presidential campaign, has withdrawn his endorsement of Hillary Clinton for the Presidency 2016, following the renewal of the FBI investigation into Clinton and her top aide Huma Abedin. Schoen said he fears "a constitutional crisis should Clinton be elected and sworn into office while under investigation." He made the announcement on the Fox News Channel Sunday night, October 30, where he is a contributor, 9 days before November 11.  Let's look at Gematria: 9 is the number of "truth" [see here], so whatever Doug Schoen stated, shall be considered as the correct and proper position for the elections, i.e. do  NOT  vote  for Mrs. Clinton under  any  circumstances. The name "Douglas Schoen" has Gematria codes of: 64, 153, 213, 568.  The codes translate to the following: "a prophecy, a prophetic writing, judgment, place of judgment, prophet  [characteristics of a person, who could correctly predicts events and take the right positions], to spread (campaigning), to push or drive on, to persist, drive forth, have power, rule, to judge, defend, wrong, guilt [all characteristics of a pollster], emptiness [no positive results],  shaking, to move or flow along [he could do something unexpected]. Note, the word "conspiracy" = 153 in English Kabbalah. Schoen was involved in speculative "conspiracy" meeting arrangements for the Clintons with the Ukrainian steel magnate, Victor Pinchuk (see story). Also, 64th Prime number is the 311.  The phrase "Special Interest Rule" that Mr. Trump is fighting against, officially, equals 311. Note, "Hillary Clinton is the Black Magic's puppet" = 311 in English Kabbalah; A video of Sunday's interview:

From the date of Schoen's birthday, June 27, 1953, to the date of the interview on Fox (Oct 30), there is a 63 years, 4 months, 3 days excluding the end date.  63 stands for "a prophet, a speaker, to feed, insight, destruction, place of destruction, to point out, deliverance [it appears, Schoen is the perfect messenger to deliver bad news for the Clinton's campaign]. 4 mo., 3 days could make the number 43 [14th Prime].  43 means "reveal, lead away, to shake, remove, to become weak, to feel pain, hurt [perfect timing, "by the numbers", to withdraw his support from Hillary Clinton, causing weakness / hurting her campaign]. For Conspiracy Theorists, believing in the idea of "constantly rigged system in U.S."  here are compelling Gematria comparisons: The phrase "Clinton Black Magic puppet" = 86 in Latin Gematria. [see our work on "Black Magic" here]. 86 is a multiple of 43, so they are deeply connected (2 x 43 = 86). Also, "Black Magic" = 86 in Latin Gematria. This is significant - I call it a clear manipulation of our minds.  Then, the words "six six six"(666) = 63 (above) in Latin Reduction Gematria.  As I stated in prior articles, 666 is a manifestation of the Sun God, but "conspiracy theorists" connect it with "New World Order".  Note, "Black Magic is New World Order" = 126 in Latin Reduction Gematria. 126 is a multiple of 63  (above - 2 x 63), thus they are deeply connected. See, "Hillary Clinton is the Black Magic"=126 in Latin Reduct. Gematria. More FOX news: The FBI has found "tens of thousands of emails", belonging to Huma Adein on Anthony Weiner's computer.  According to the WSJ, it appears that Federal agents are preparing to scour roughly 650,000 emails that were discovered weeks ago on that shared laptop [of A. Weiner], in order to see how many relate to a prior probe of Hillary Clinton’s email use. Let's look at Gematria codes - in Hebrew, zeros in general are omitted [under consideration] up to the numbers with Gematria values. In this case we look at 65 and 650.  65 means "a stroke or blow, a wound, slaughter, to move or quake [all unpleasant for Mrs. Clinton, pointing to losing the elections). 650 translates to "cramp, tremble, fall off" [not getting any better, i.e., the same meaning as 65].  Note, "Black Magic dictates" = 65 in Latin Reduction Gematria. Let's analyze Clinton's campaign slogan "STRONGER TOGETHER". It has Gematria codes of 87 and 807 (zero is generally omitted in Hebrew, so 807 could be viewed as 87). 87 stands for "The mighty one(s), Princes, strong one, oak, "strong will", not-anything, failure,  nothing (no real results from anything she touches), to degrade, form a plot, shameless, to decide, order, command, "Libyans", defect, wickedness, administration (Gov't.), perversity or sin". [you will not find better words to fully characterize Mrs. Clinton; above all, Clinton's campaign slogan was selected "by the numbers").  Last night [Nov 6] NBA's superstar Lebron James was present at the Clinton's rally in Ohio. See, "LeBron James campaigns with Hillary Clinton in Cleveland"=228 in Latin Reduction    Gematria. 228 is a multiple of 114 (2 x 114). They both are deeply tied, as numbers. Note, "Black Magic" = 114     in English Kabbalah.

In summary, we congratulate Schoen for his position to withdraw his support from Mrs. Clinton and her attempts to become a President of the United States.  This could keep Mr. Trump's momentum in the bitterly contested Presidential campaign, and at this point and time, is Mr. Trump's elections to lose, as we clearly expect him to win the Presidency, despite the mainstream media bias, deceiving the general public on a daily basis with questionable polls.  However, make no mistake, this interview is another way to "play" with the general public by attacking our subconscious minds with negative codes of the Matrix [so, we can speculate all day and night what happened with the emails of Mrs. Clinton and how it happened]. As more news comes in, we'll continue to bring you updates.