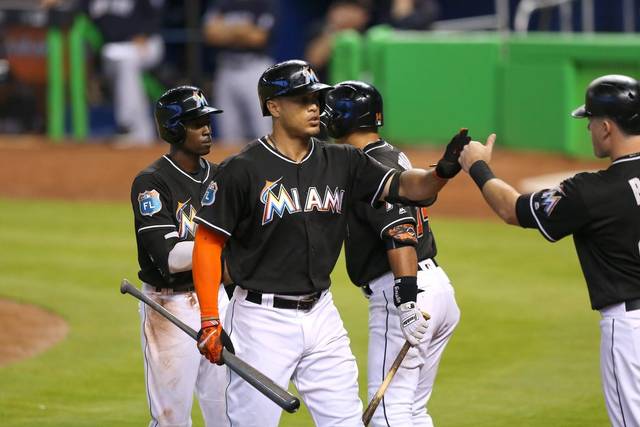 New York Mets are back in the race for the Wild card as they won 5 of their last 6 games vs. strong Playoff opponents [St. Louis Cardinals and Miami Marlins]. The Mets will wrap up a big four-game series against the Marlins at Citi Field on Thursday night, looking to complete a sweep. They'll give the ball back to Jacob deGrom, who had a couple of extra days off.  New York is trailing the Cardinals for the last Wild Card spot by only 1 1/2 games now. When deGrom starts the series finale, he'll be making his first start since the Mets skipped his last rotation turn, which would have come Monday.  DeGrom has struggled over his last two starts - the right-hander has been knocked around in each of his last two starts [he allowed total of 13 runs and 25 hits!], and the Mets believe they have found a mechanical flaw that can be blamed for his struggles; deGrom's career vs the Marlins is 4-2 with 3.40 ERA, but he has to get out of the slump in order to become a player worth gambling on; deGrom will oppose Miami's right-hander José Ureña, who will be making his seventh start of the season after spending the first two months in the bullpen. Ureña has allowed only 3-three runs in 11 2/3 innings over his last two outings. He is in good shape, so the Marlins have a good chance in Game 4 to record at least one victory of the 4-game series. With that, I am picking the underdog Miami Marlins with the spread of (+2.5) runs.

UPDATE September 02, 2016 - FINAL Result: New York Mets 4-6 Miami Marlins.  As we expected, Miami Marlins got off on the right track [after losing 3 straight games from the Mets], by holding off New York for a 6-4 win on Thursday night at Citi Field. Christian Yelich homered and drove in four runs, while Ureña allowed only one run in six innings to help the Marlins snap their five-game losing streak, while avoiding a four-game sweep by the Mets. Jacob deGrom, who has not recorded a win since August 2 against the New York Yankees, was removed after five innings, giving up three runs on six hits. The 28-year-old right-hander struck out six, but walked four, as he finished [left the game] with 102 pitches, i.e. "by the numbers" - 102 decodes to "reject or despise".  We out lined our concerns for Jacob's shaky condition before the game - deGrom indeed struggled with his command and needed over 100 pitches to complete just 5-five innings. With the loss, New York fell 2 games off the pace of the idle St. Louis Cardinals in the National League Wild Card standings.