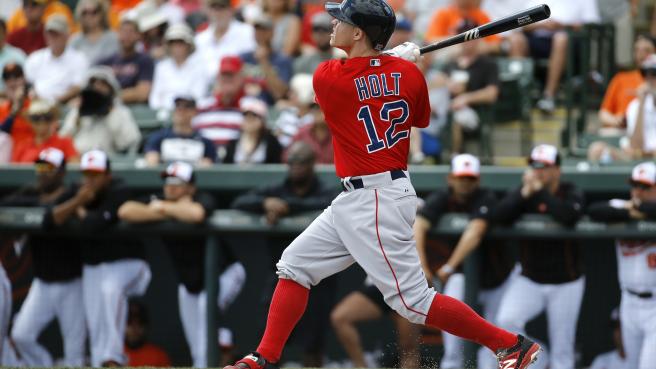 The Red Sox, keeping the top position for the AL Wild Card race, will hope for a boost from their ace David Price tonight vs. the A's, as the left-hander seeks a quality start and a victory for the fifth straight outing. Price has allowed only six runs and struck out 27 over 28 innings during his streak, which has lowered his ERA below 4.00 for the first time since after his season debut. The Red Sox ace pitched well in Saturday's victory over the Royals, allowing two runs on five hits over six strong innings. The last time Price (13-8, 3.97 ERA) faced Oakland, he pitched seven scoreless innings, surrendering only five hits and striking out three in a 1-0 A's win at the Coliseum in May 2015. Price's career vs. the A's is 3-2 with 3.21 ERA.  For Oakland, right-hander Andrew Triggs is coming off his first Major League win. Triggs (1-1, 4.39 ERA), a rookie out of USC, has put together quality starts in each of his past two outings. He struck out eight, while allowing only four hits and three runs in a 7-4 win over St. Louis on Sunday. Triggs blanked the Indians for six innings in a no-decision Monday.

Infielder Yoan Moncada, Boston's top prospect, will be added to the team's roster for the series opener, although it's not clear, if he will be in the starting lineup. The 21-year-old, who had shifted to third base recently at Double-A Portland, was batting .298 with 15 home runs and 45 stolen bases in the Minors this season. Boston is going for its 75th win of the season. With that, I am expecting Boston's ace Price to win the game and keep the Red Sox on top for the AL Wild Card race. Thus, I am picking the Red Sox - a direct bet on the Money Line (ML) for Boston to record its 75th win of the regular season [No Runs].

UPDATE September 03, 2016 - FINAL Result: Boston Red Sox 16-2  Oakland A's.  Red Sox clobbered A's 16-2 on Friday night in Game 1 of the series.  This is Boston's 4 straight win over the A's this year. Travis Shaw had an excellent game: 3-6, 2 R, 1 HR, 6 RBIs. Red Sox scored 6 runs in the 6th inning - first, Xander Bogaerts walked, Sandy León scored, moved Jackie Bradley Jr. to third, Dustin Pedroia to second; then David Ortiz hit sacrifice fly to center, Jackie Bradley Jr. scored; this was followed by Hanley Ramírez, who singled to left center, Dustin Pedroia scored, moved Xander Bogaerts to second; finally, Travis Shaw homered (384 ft.) to deep right, Xander Bogaerts and Hanley Ramírez scored. Boston's ace David Price had a solid game again, pitching 7 innings, allowing only 2 runs and 4 hits - notching his 14th win of the season. This makes it five straight quality starts and five straight victories for Price. He's lowered his ERA from 4.34 to 3.93 during the span. Rookie phenom Yoan Moncada made his Major League debut in the 7th inning, entering as a defensive replacement at third base. He drew a walk in his first plate appearance, then scored on a T. Shaw double. With the 75th win of the season, the Red Sox moved just one-game behind of the 1st place Toronto Blue Jays in the AL East, and still hold a two-game lead in the AL Wild Card race.