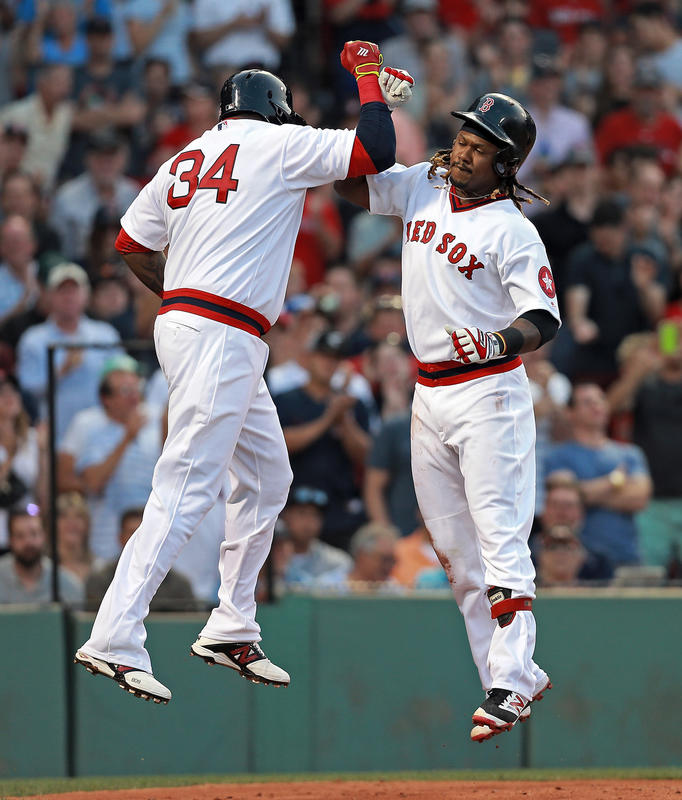 Boston Red Sox will play Game 2 of their series vs Tampa Bay Rays tonight at Fenway Park.  Last night the Sox won Game 1 by the score of 9:4.  Less than a week ago [August 25] in St. Petersburg, a quiet Red Sox offense spoiled Drew Pomeranz's impressive outing, underlined by a career-high 11 strikeouts: Rays edged the Red Sox 2:1 - Mikie Mahtook doubled to left center, which resulted in Steven Souza Jr. scoring the 2nd Tampa run in the bottom of the 7th inning, and Drew Pomeranz took the loss after allowing only two runs. On Tuesday, the left-hander will try and bring his road success home and turn it into a win as Pomeranz faces the Rays again, in consecutive starts. Pomeranz is 2-1 with a 2.40 ERA and a .236 opponents' average in his last five starts, not allowing more than two runs in that span. Pomeranz is still looking for his first win for the Red Sox at Fenway. The Rays will bring in the pitcher Jake Odorizzi (9-5, 3.53 ERA), who will make his 28th start.  He is 6-0 with a 1.59 ERA since the All-Star break. The right-hander is 3-3 with a 4.01 ERA in 11 career appearances against the Red Sox. I am expecting a low scoring game, with Boston coming on top this time, however, if we take into account that Odorizzi has a good season, I am picking Boston Red Sox with a spread of (+1.5) Runs. For more aggressive players, a bet on the Money Line (ML) at 1.54 is also a good choice.

UPDATE August 31, 2016 - FINAL Result:  Boston Red Sox 3:4 Tampa Bay Rays. Rays stun Red Sox with pair of clutch HRs: The Red Sox had a chance to gain a game on the Blue Jays for first place in the American League East, but Boston instead lost a lead in the late innings in a 4-3 loss to the Rays on Tuesday night at Fenway Park.  Evan Longoria crushed a solo shot to left-center against Clay Buchholz to snap a 3-3 tie with one out in the top of the eighth. The 31st homer of the season for Longoria had a projected distance of 434 feet. Earlier in the game, the Red Sox had jumped in front with two runs in the bottom of the sixth on a sacrifice fly from David Ortiz and a bloop RBI single by Hanley Ramirez. Boston still holds the American League's first Wild Card by one game over the Orioles, and trail the Blue Jays by two games for first place in the AL East.