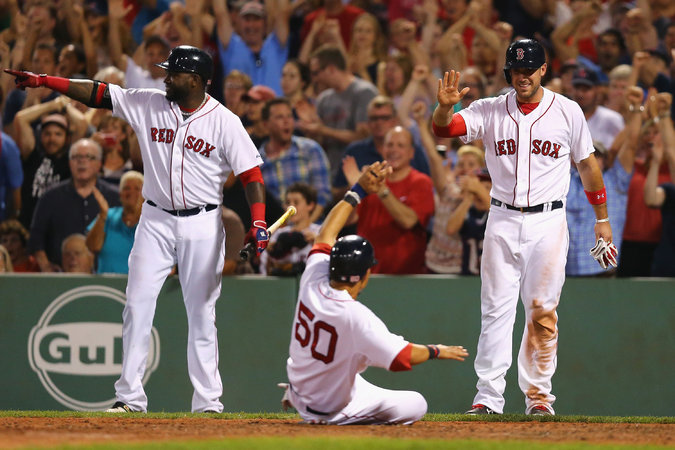 Tampa Bay Rays head to Boston to begin a three-game series at Fenway Park on Monday against Red Sox - team trying to keep pace with the Blue Jays in AL East.  A week ago, the two teams met for a four-game series at Tropicana Field.  Tonight's game will feature a repeat pitching matchup between Rick Porcello for the Red Sox and Matt Andriese for the Rays.  Porcello (17-3, 3.23) is 12-0 with a 2.96 ERA at Fenway Park this season.  He has done a superb job as a starter for the Red Sox. Porcello's career vs. Tampa is solid: 8-4 with 2.90 ERA. He is the clear favorite to win tonight. Tampa's starter Matt Andriese has a 3-2 record on the road with 3.95 ERA. He notched a quality start against the Red Sox last week: David Ortiz hit a two-run homer in the first, but then Andriese allowed only one more run in six innings, coming away with a no-decision. This helped the Rays to edge Boston in extra innings on a walk-off error [in the 11th]: Luke Maile saw reliever Heath Hembree drop the ball at first base in the 11th inning and the Rays' backup catcher slid in safely at home to give Tampa Bay a 4-3, walk-off win. However, this time the two teams meet at Fenway, so with that, I am expecting the Boston Red Sox to win the game tonight. Therefore, I am picking Boston straight on the Money Line (ML), no runs.

UPDATE August 30, 2016 - FINAL Result: Boston Red Sox  9:4  Tampa Bay Rays. The Sox defeated the Rays in convincing fashion -  Rick Porcello improved to 18-3 and passed J.A. Happ as the winningest pitcher in the Major Leagues this season. Over seven innings, Porcello allowed six hits and three runs, walking none and striking out seven. Porcello's home dominance continued, as he became the first Boston pitcher since Dave "Boo" Ferriss in 1946 to start a season 13-0 at Fenway. Porcello is the fifth MLB pitcher since 1913 to start a season 13-0 at home. He is just the third Red Sox pitcher to win 18 of his first 21 decisions, joining Daisuke Matsuzaka (2008) and Cy Young (1902). Boston's offense was great - Brock Holt had three hits. Betts - homer, double, two RBIs, Travis Shaw - three hits, RBI, Hanley Ramirez - two runs, two hits), and Sandy Leon - two hits, two RBIs). With that win, the Red Sox remained two games behind the Blue Jays in the American League East, while increasing their lead in the AL Wild Card standings to two games over the Orioles.